As many of you know I got a new puppy this summer. Yes we still have Lada the amazing super dog. But my human “baby” was going off to kindergarten and perhaps I was feeling a little maternal, so I agreed to a new puppy. But come on, how could you say no to this? 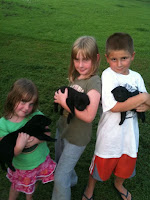 The one in the middle is ours. Well just so we’re clear, all three of the human kids are mine, but just the puppy in the middle came home to live with us.
Yes, it’s yet another black lab. I’ve only ever had black lab dogs. If you’re going to have a dog it should be a big dog. Those little chihuahuas and dachshunds aren’t real dogs. They’re more like rats in my opinion. Besides, little dogs have low self esteem because they’re so little. It’s why they always walk around yapping and biting.
And I am absolutely a dog person. I had a couple cats for a little while. But it was just a phase that I outgrew. I am now and will forever be a dog person.
But, getting a new puppy is a lot like raising another baby; the need for constant attention, full time supervision and baby/puppy proofing of the house. And since I appreciate both my human and canine babies sleeping through the night, I’ve got to keep them active during the day.
Thanks to new puppy Stella, we’ve returned to our daily dog walk sessions. Lada the super dog is so well trained I don’t even leash her. She stays right by my side. Stella, however, thinks her leash is another chew toy. She’s young, she’ll learn. I hope.
Some nights I go early enough so the kids can walk with us. Those are very slow walks where the dogs and kids take turns discovering rocks, leaves, or whatever other joys are on the side of the street to be sniffed and picked up. The kids enjoy it and it’s nice to be out together as a family. Sometimes even the teenagers will join us. The teens don't usually last as long as the dogs though.  We're too boring and it's much more fun to pick on a younger sibling. Eventually they get sent home. They're young, they'll learn. I hope.
Occasionally I’ll jog with the dogs. But Lada is getting too old to make it all the way around the loop, and Stella is too young to run that far. So mostly we walk.
My favorite walks are the nights I go later, after the kids are in bed, the heat of the day is gone and the neighborhood is quiet. It’s tranquil and peaceful. I can take my time and process the events of the day, make plans or just daydream.  It’s the best therapy there is and it’s way cheaper than weekly sessions with a doctor and a couch.
I really look forward to getting home from work and walking the dogs. I need those nightly walks as much as they do. Walking the dogs really helps me end my day on a peaceful note. I’m not sure who looks forward to it more, me or the dogs?

This is new puppy Stella telling me it's time to go.
Posted by Jennifer Williams-Fields at 11:19 PM