My God Is Loving Not Vengeful 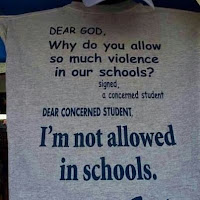 This picture has been making the rounds on Facebook and other social media sites. It's been tagged to my wall a few times by well meaning friends.

I'm not a church-going Christian and I tend to interchange Universe with God. I've both been on my knees praying to God as well as standing obstinate yelling at Him.

But this picture bothers me. It bothers me deeply.

My understanding of the Christian belief is God is everywhere and "where one or more gather I am there". I am confident in those terrible minutes of incomprehensible violence, many prayers were being spoken and God's name was being called.

I don't believe in a God that would "allow" such atrocities simply because prayers aren't formally spoken in a classroom. If that was the case, why did He "allow" the Amish school shooting from a few years ago?

Violence is in our society and it has affected our schools and our kids. Saying violence is in the schools simply because we don't allow prayer and it is God's punishment on us is just one step away from becoming a  member of the Westboro Church group. And I'm just not comfortable assuming I know  why God would punish someone or how he chooses who to punish. I don't even believe God is a punishing God.

School shootings, as are any mass act of violence, are the acts of a mad man. A sick, flawed, human mad man.

And every time it happens, I believe God weeps.

Posted by Jennifer Williams-Fields at 11:57 PM