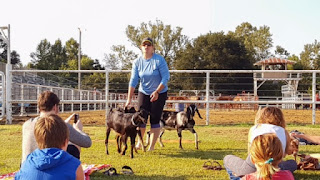 Our local parks & rec department hosts the Goat Days Festival every year. I have no idea why my small town celebrates Goat Days, except I guess because there are a lot of goats around here. They usually call me to teach at local events, but this was a different call. And one that I didn't hesitate to say yes to! 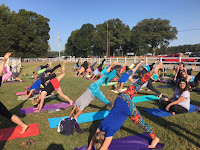 I really wasn't sure what to expect though. I figured we would have a decent turn out. Probably my regular yoga people and a few people there for the goats. 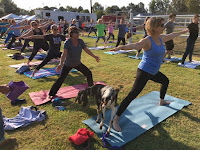 Before class started I introduced myself, asked who had any yoga experience and asked about any health conditions I needed to be aware of. All the usual questions at the beginning of a yoga class.

It was probably 60% people who had some yoga experience and 40% who were just there to try it out.

But definitely 100% of the people were really there for the goats.

We began the yoga just as the baby goats were led into the pen. And I immediately lost everyones 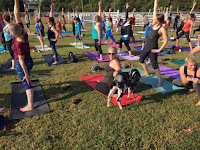 attention. I told them no worries, I know you are really here for the goats so just have fun.

And we had so much fun!

The goats just wandered around while we practiced. People would stop to pet the goats or take goat selfies.

The farmers that brought the baby goats did a great job making sure the goats made their way throughout the big crowd by placing small  amounts of goat food on peoples yoga mats. 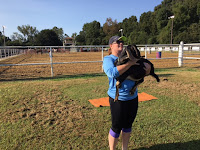 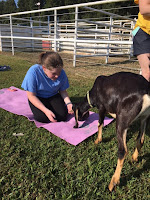 The biggest question I've gotten all day since goat yoga is "did the goat pee or poop on anyone"?

At the very end of class, one goat did pee on a woman's mat. But she had a good sense of humor about it and decided she will just buy herself a new yoga mat.

I saw a couple goats dropping goat pellets as they walked, but fortunately goat poop isn't like cow poop. It's smaller and doesn't stink!

The next question is when am I going to teach goat yoga again?

As soon as possible! The farm owners told me they have two more goats back at the farm who will be giving birth in a couple months so hopefully later this fall I will get to play with some baby goats and teach yoga again.

Teaching yoga at special events always reminds me of how much I love teaching and how much I am meant to teach. A friend took this picture below and said I looked so pretty. No, what you are seeing is happiness. I got to do what I love and teach yoga, to a large group of people who might never get to experience yoga and there were cute baby goats to play with.

My happiness cup is overflowing today. 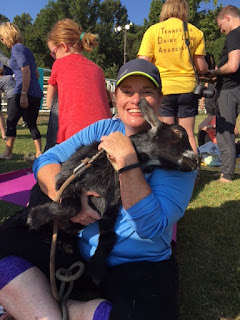 Posted by Jennifer Williams-Fields at 11:50 PM