In my heart I will forever be a Northern city girl. I love the hustle and bustle, I love the ethnic diversity and I love the feel of walking big city streets. But after living here in Tennessee for five years there are a few things I have learned to love about the South. Although some of the items on the list I love because they still after five years make me crazy nuts and miss my Philadelphia home! 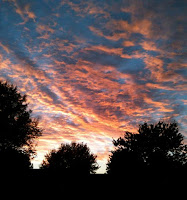 1 – Southern skies. During a sunny day the sky is a blue that you can’t find in a Crayola box and the clouds are so fluffy and close it feels like you can reach out and touch them. And the summer sunsets, well, they can be just breathtaking.
2 – I have a plum tree in my front yard. Not like the purple plums you buy in the store, but smaller sweeter ones. Truthfully I didn’t even know what they were the first year we lived here and I let them all fall to the ground and rot. Once I found out what they were, and tasted my first front-yard plum, I was hooked. The kids love the homemade plum jam we make, and it’s an evening of good fun when we let  the neighborhood kids take turns climbing the ladder to reach the ripened plums at the very top of the tree.
3 – The phrase “Bless your heart”. Sometimes this is said by a well-meaning person who is genuinely concerned and interested in what you’ve just told them. But my absolute favorite way to use it, or to overhear it used, is when someone says “well bless your heart” but what they are really saying is a giant’ F’ You’ to the person in front of them. I think maybe it’s something Southern mothers have passed down to their daughters: how to smile sweetly, say something nice, but mean something entirely different!
4 – Just like Ouiser Boudreaux in Steel Magnolias says “real southern women grow vegetables.” And they are usually very generous in sharing them! It’s very common to find a basket of tomatoes, zucchini, okra, or cantaloupe just sitting at the front desk of my YMCA free for anyone to take.
5 – The memory of being so happy when I realized one of our local restaurants offered a vegetable plate – and it wasn’t fried! Of course I also remember the day the waitress let it slip the grilled veggies that I loved so much were sprinkled with bacon fat – but still, they weren’t fried!
6 – Speaking of fried food, when we first moved here I asked a waiter if I could have my catfish not fried. He said no. I thought he was kidding and so I ordered it anyway. Nope, you really can’t order grilled catfish. I think it might be a law or something that catfish be fried in the South.
7 – And more fried favorites – gas stations in the south do more than pump gas and sell lottery tickets. They are a popular lunch spot! My local gas station has a counter of nothing but fried stuff. I don’t know what all of it is, and I’m actually a little afraid to ask!
8 – My three younger kids are really picking up the Southern accent. Although I don’t’ allow them to say “ain’t”, “fixin to” or ‘ya’all.” But the kids love when I get mad enough that the southern slang I’ve picked up comes flying out of my own mouth. Apparently it’s funny when as the mom I open the back door and scream “Little girl! Don’t you make me holler for you again. Ya’all better move faster than that!”
9 – And again with some of the phrases you hear down here: “We gotta kick rocks.” I admit when I first heard that one I had to stop and ask what it meant. Kicking rocks means you need to hurry up. Why kicking rocks makes someone move faster I still don’t understand.

10 – Finally, the cotton fields here in Memphis. I never knew that before cotton is the white fluffy stuff we all know, it’s actually a little purple flower. Sometime in September the cotton “pops” and the fields look like they are covered in snow. Then about the beginning of October, the local roads are covered with huge combines and farm equipment and the cotton is bailed up and gone until next year.
Posted by Jennifer Williams-Fields at 5:01 PM