It's been almost exactly a year since Millington and Nashville, TN were hit with horrible flooding, tornadoes, straight line winds and millions of dollars in damages. 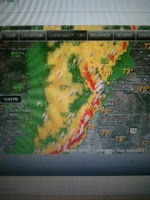 Right now it's quiet at my house. But just south of here they are reporting 92 mph winds. No, that's not a misprint. Winds clocked at 92 miles per hour. The weather guy is saying it should begin here in 12 minutes.

Some of my friends make their families sleep in the living room on nights like this so they can quick get into a bathroom in case of a tornado. I let my little kids continue to sleep in their beds, but each of the older boys knows when I say NOW they need to grab a younger sibling and get into the bathroom.

We've hidden in the bathroom more than a few times since we've lived in Tennessee.

The irony is we moved to tornado ridden Tennessee when we evacuated Hurricane Katrina in New Orleans. Less than 24 hours before the storm hit NOLA, I packed the kids, including kid #6 who was just a newborn, the dog and some dirty laundry into the car and headed north.

I had no idea at the time my life in New Orleans would be washed away and I'd be starting all over again. Although the good thing about a hurricane, if there is a good thing, is you get enough warning to get out of the way.

Even when the tornado sirens are going off (they aren't here yet), you don't know where the tornado will hit until it's right on top of you. And you can't out run straight line winds and flooding.

It's going to be a long night.
Posted by Jennifer Williams-Fields at 10:33 PM