Shhh... Listen To The Whisper

Yoga has taught me a lot of things and given me a lot of gifts. Yoga continually forces me to question the what and the why of my life and just when I think I’ve got the answer, the questions change.  Right now my lessons seem to be focused on one of the niyamas of yoga -  svadhyaya, also known as self study.
Svadhyaya means self-examination.  It’s a way of studying myself as part of a bigger picture to find intention in everything I do, accept my limitations and cultivate a non-reactive approach to self-destructive tendencies.
That’s a big way of saying it’s a lesson in learning the world doesn’t revolve around me. Whatever or whoever you call it, there is something bigger than me going on in the Universe.
I think of it as a divine whisper in my ear saying, “Stop. Be quiet. It’s not about you”.
When I spend the day cooking a delicious and healthy meal to nourish my family, and one member decides not to join the family, it’s the realization that it’s his decision and not a reflection on my intentions.  I wanted to cook a hearty soup with love. I did and now it’s his decision whether or not to accept that bowl.
My initial reaction is, well, to react.  But wait, why did I cook? Was I expecting a Normal Rockwell moment with my family saying, “oh mother dear this is the best soup we’ve ever tasted. We love you and are so grateful for you.” No, not really.
Instead of reacting though, I get the whisper, “It’s not about you.” There’s a bigger picture than just a bowl of soup.
In my yoga classes I’m always reminding my students this is their class. Just because I cue a pose doesn’t mean that is where they need to be at that moment.  When I take someone else’s class I follow the plan, but stop and rest if I need to or maybe even go deeper if I feel I can. There’s a bigger picture going on than just what pose I can do.
When I was in Los Angeles I was fortunate to have taken a class with Steve Ross.  (If you don’t know who Steve Ross is, you are really missing out. You must get his book Happy Yoga and check out his show Inhale on the Oxygen channel.)
First I was surprised by how small his studio was. I pictured a big fancy yoga guy would have a big fancy studio. Instead it was small and comfortable and I was welcomed like they’d been waiting for this star struck woman from Memphis to walk through the doors.
I rolled out my mat and was ready to soak up everything he said in the 90 minutes I was there. At one point though I realized people were doing their own thing. One woman was in headstand, one was in handstand and I was in downdog like he’d cued. People, are you crazy? This is the Steve Ross! Do what the man says!
But Steve wasn’t fazed. He heard the whisper loud and clear “It’s not about you.”
I remember that now as I teach my classes and I notice someone just not doing what I am saying. Maybe they don’t understand my cues, but more often than not it’s because they are practicing their yoga in their class their way. I am just the guide leading them on their own journey of self discovery. There’s a bigger picture than I can see.
My yoga journey continually challenges me to examine my own needs, wants and motivations. In every action I take, what are my intentions? What do I expect out of this?
Most importantly of all, let go of those expectations because it’s not about you. 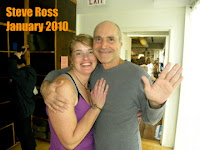 Posted by Jennifer Williams-Fields at 11:04 PM