Grateful For Kids Who Aren't Afraid Of Work

I realized today I have raised kids who understand the value of work. With the many financial changes this year I've had to say no to their requests more than I like. But, I also see now where fortunately the groundwork I've laid over the years has made my "no" to them less harsh to hear and, even more importantly, has given them incentive to find ways to make it a "yes" on their own.

Kid 1 is working full time before he leaves for Navy boot camp in two months. Even last year when he was only working part time while in high school he bought each of his brothers and sisters a Christmas present with his own money. This year he is also buying presents, but when he babysat for me recently I offered him some money to get the kids dinner. "No, I'm working now. I got it", he told me.

Kid 2 is dual enrolled as a junior in high school and a first semester at the local community college. He works part time at the local YMCA in the youth station and child care. He works to help pay his college tuition and car insurance and is never late on a payment. He saved for months to buy his girlfriend a ring. (No, not that kind of ring!)

Kid 3 is too young for a real job at just 15 years old. But he is the go-to babysitter for a friend and her two young children. He also does odd jobs such as mowing yards and helping the dance school owner construct a new dance floor. He still sees the money he's earning as a ticket to Game Stop, but recently he said he is going to start saving part of his pay in a savings account as well.

Kid 4 wants to go on her Honor Society trip this year, but it is just totally out of my budget. I told her if she could find a way to pay it herself she could go. I honestly expected her to just forget about it. But, no, she thought it through and came up with a plan to earn the money herself.

Tonight she really made me proud. Her friends invited her out to dinner and a sleep over. But she had already committed to help a pregnant friend of mine clean her house once per week between now and her trip in June. Kid 3 has been sick all week and couldn't do his regular babysitting job, so kid 4 stepped up to clean and babysit tonight. I wasn't sure how she'd do at first knowing she was missing a night out with her friends. But she didn't once complain. In fact she said, "If I can keep this job for a year I can make a lot of money!"

Even kids 5 & 6 have stepped up to offer their own limited finances when they felt it was necessary. How sweet to have a 10yo offer you his prized $2 bill to help pay for a dinner out for the family. Of course I would never take the money, but just to know they are willing to chip in is all I really need.

I want my kids to enjoy the luxury of childhood and not have the financial worries that I do.

But I am very grateful that they don't feel entitled to luxuries and are willing to work for what they want. 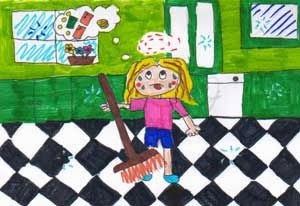 Posted by Jennifer Williams-Fields at 11:44 PM

Email ThisBlogThis!Share to TwitterShare to FacebookShare to Pinterest
Labels: #monthofgratitude, kids, kids and money, month of gratitude, value of work