My heart has been heavy all day with the news of the Colorado shooting at the midnight showing of the new Batman movie. I don't live in Colorado and I don't know anyone involved, but still I grieve along with so many others.

At 11pm last night I said goodbye to my three teen boys as they headed out to our local midnight Batman showing. I've never seen teen boys so excited, they were practically pacing the house all night watching the clock. I gave them my usual instructions - have fun and be careful. I knew I wouldn't be waiting up for them so I told them be sure to wake me when they got home.

After all, what could possibly happen in a movie theater only ten minutes from my house?

And then this morning I woke up to the news out of Colorado. My first thought was how many other moms waved goodbye to their kids last night with the same thought. What could possibly go wrong? Just wake me and let me know you're home.

There but for the grace of God go I.

It's been hard to avoid the news and analysts today. All the talk over whose fault this was - politicians, gun control, Hollywood, society. No. This was the evil work of a mad man pure and simple.

And I can't imagine that the grieving mothers tonight give one hoot about political parties. They just want their child to walk through that door and say "Mom, I'm home."

Posted by Jennifer Williams-Fields at 10:56 PM No comments:

As of tonight I don't care if anyone ever again calls me a Starbucks junkie or an iPhone addict. Tonight Starbucks and the iPhone saved my kid from starvation!

OK, he probably wouldn't have starved, but still, he was hungry.

Kid 2 left Atlanta today after a week away at rugby camp, If everything went according to plan, he would be dropped off at the Atlanta airport, I would finish work here in Memphis, zip over the airport to pick him up and then we'd go have dinner somewhere.

I told him, no worries, I'm sitting in the Memphis airport and I'll sit here all night until you get in.

So go get something to eat. You have money left right?

You only have $2 with you? What were you thinking travelling with just $2 cash?

Oh come on, he's 15 years old. He was thinking mom will buy dinner when I land in Memphis. And there have been times I have recklessly travelled with not much more than $2 in my pocket. Sorry, kid, you're going to have to have a growling stomach until you land.

After yet another hour or so of delays, Kid 2 calls me again.

"Hey, if I download the Starbucks app on my iPhone can't I use your account and buy something here?"

Hmmm, my little computer hacker might just be on to something!
Go for it, try it! While he downloaded the Starbucks app I reloaded some more money on to it from my end. I texted him my user name but had no idea what my password was.

Within a matter of minutes, called back. He had food and drink in hand!

So thanks to Starbucks and a hungry but tech savvy kid, his five hour delay was made at least a little more comfortable.

Now I just have to remember to change the password on my Starbucks mobile app before he has sudden hunger attacks here at home too. 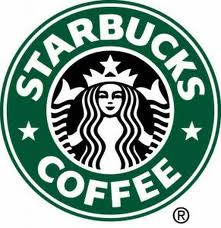 Posted by Jennifer Williams-Fields at 12:18 AM 2 comments:

Not Sure If I'm Alice or The Mad Hatter 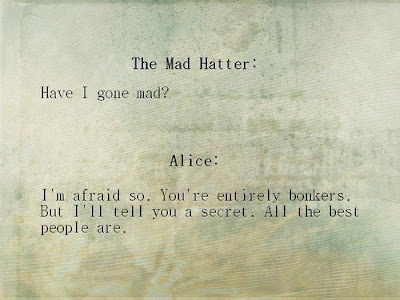 Posted by Jennifer Williams-Fields at 10:53 PM No comments: