My latest Elephant Journal post. It's quite different than what I usually write.

It's special to me and I'm proud of it.

I wasn't sure what to expect when it was published, but I've gotten some beautiful emails from people who have read it, felt it, lived it and understand love and longing.

Waiting For My Real Life To Begin

Last week at work, during one of our regular deep philosophical discussion periods, someone said "hey you should listen to this song."

My response was an eye roll and a let's just get back to work now.

But I sat and listened. And as I listened I felt my eyes get moist and my heart become heavy.


Any minute now, my ship is coming in
I'll keep checking the horizon
And I'll check my machine, there's sure to be that call
It's gonna happen soon, soon, oh so very soon
It's just that times are lean

Looking back, I can see now that I've spent too many years waiting for my real life to begin. "It will be better when...", "If I can just make this happen...", "Someday I'll have the time/money/energy..."

When I awoke today, suddenly nothing happened
But in my dreams, I slew the dragon
And down this beaten path, up this cobbled lane
I'm walking in my old footsteps, once again

The years went by, my life continued and I kept waiting. Waiting for something to happen.

Then something happened. Something big. And I was scared. I'm still a little scared. But I don't want to wait any longer.  I'm ready to find a way to steer my own ship.

I know the sailing won't be easy. But there is something comforting about taking control. I know there are still hard times ahead. I know I'm going to make mistakes. I know times will be lean.

But they will be my times, my terms, mine to overcome.

I know people now who are in a holding pattern waiting for their own lives to begin. I see the same fear and unhappiness in their eyes that I had in mine for so long. I know the pain they feel. I know what 's holding them back.

As sad as I am for those people, there's nothing I can do to help them get moving. When they decide it's their time, or their big scary moment happens, it's up to them to begin their own life.

As I sat and listened to the song I became aware of one of my young staff girls watching me. I looked at her, smiled, wiped the tear away from my eye and pretended to get back to the work on my desk.

But inside I knew I was finally ready. It is time to get to the real work of making my new life begin.

For One Hour He Liked Me Again

Let's just say, in the most loving and kind way, that kid #5 has been "difficult" lately.

He's been "difficult" for about a year now, sometimes it's worse and sometimes it's better. Right now it's not good. We've been to counselors and the kid has many valid reasons to be angry and acting out. At times I'm still angry and want to act out, but I have the maturity to know how to channel it. He doesn't.

I understand the psycho babble surrounding it all; "he knows you are safe to be angry at because he knows you will never leave him", "he is acting out because he can't express his feelings", "his sense of security is gone and he's unsure of his future", "just keep listening to him and eventually this will pass."

Yep, I get it all. But it still hurts like hell when he won't even tell me he loves me anymore.

The irony is he constantly wants to be with me. I can't even take a five minute trip to the store without him crying to go with me. I'm exasperated trying to make this kid happy, to feel loved and safe and secure.

So last night when he wanted to come to my second job with me I hesitated. In the past when he said he wanted to go, he would change his mind once we got there and whine to leave. He would annoy his sisters who were there with me. He would complain about anything and everything.

But I admit I said yes just to avoid a fight with him.

And then a weird thing happened. He asked to participate in my yoga class.

Again I hesitated. What if he acts up in the middle of my teaching? Although there are some teenagers there, at only ten years old he will be the youngest one in class, what if he feels embarrassed he can't keep up? Really, I can't even go teach for an hour without you wanting to be right next to me?

But, again, to avoid a this time public fight, I said yes.

And then another weird thing happened. He not only participated in, but he was actively engaged in my 1 hour level I/II yoga class.

He down dogged, twisted, stood his Warrior II and never gave up. He never complained. He never cried or demanded my sole attention.

I tried to pretend I wasn't really watching him during class. But I was well aware that he knew modifications for poses he wasn't quite ready for without me having to tell him. Wow, he's been paying attention to my yoga all these years.

I was well aware of the look of accomplishment on his face when he balanced in tree pose. I saw the calm and rest wash over him during savasana. When the class sat together at the end before we said Namaste, he actually looked more peaceful than I'd seen him in a long time.

As I was about to walk out of the yoga room, he said "hey mom my back was hurting but now it doesn't." I tried to play it cool and nonchalantly say oh that's good I'm glad you came to class with me tonight.

And then the best part of it all happened. He hugged me and said he was glad he was there too.

I swear I heard angels singing at that moment.

Of course, the moment was fleeting. And within minutes he was mad about something.

But for that one hour, and that one glorious moment, my sweet boy returned and he acted like he liked me. It gave me the hope I needed to believe that if I just keep loving him, this eventually will pass. 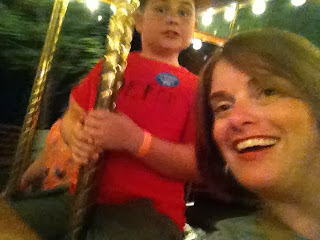