I have a lot of runner friends - like serious half marathon/marathon type runners. Their dedication amazes me and sometimes confuses me (running in the rain/snow/extreme heat)? Almost all of them also complain about their knees.

I've had some pretty good success in converting them to running as cross training and I look forward every year to teaching a 6-week Yoga for Runners session leading up to the annual Munford 5K race. And now with race season really heating up, a few of my friends are in danger of being sidelined by knee pain.  It's even slowing down Natalie's training schedule for the Disney Princess Half Marathon. And since Natalie is part of the running crowd that doesn't like my advice to back off their training schedule and rest, instead I suggest some extra yoga.

When knees begin to hurt, I first look at what's going on in the hips. My students know I say all the time "it's all connected", so an imbalance in one area will certainly cause problems in another area. Because of the repetitive motion, running often causes tightness in the hip flexors, hamstrings, quads, IT band - which can all lead to pain in either the lower back or knees. When I design a yoga class for a runner, I like to not only stretch but also to strengthen the muscles supporting the knee. 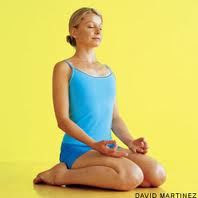 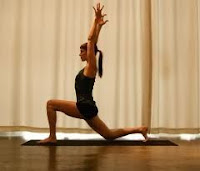 To strengthen the total body and mind:

Ahimsa is translated as non-violence, but really it just means do no harm. Practice ahimsa to yourself and your body. Know when to challenge yourself, and know when to listen to your body's signals, back off and rest.
Posted by Jennifer Williams-Fields at 10:26 PM