I Went MIA But I Ran a Half Marathon!

It's been two months since my last post. That just makes me sad and a bit ashamed.

So to catch you up, here's what I've been doing:

I'm still working my new job and it's still going well, except October was budget time and I've never been responsible for a budget that large before and how do I know how much revenue each department will bring in during 2018 and oh my god what if I budget wrong and this is really stressing me out and then I got sick, just my yearly Southern fall upper respiratory thing but then kid 5 had a serious injury and we were in LeBonheur Children's Hospital for two days and then literally the next day Kid 4 had a very serious injury and she was admitted to LeBonheur Children's Hospital for two days and I didn't even go to work for a couple days but I have the best co-workers in the world and it wasn't even an issue and we are still running to follow up appointments and Kid 4 is still having signs of spinal chord trauma which is pretty scary and then because of all that I forgot I was sick so then I got really sick and gave in and paid $150 for the doctor to tell me I was sick and prescribe an antibiotic but I guess it was too late at that point because a few days later I had to pay another $150 for a different doctor to tell me I was really really sick and I needed a stronger antibiotic  so I came home and slept for 12 hours straight and then 5 days later I RAN A HALF MARATHON!

I really did it. I ran the St. Jude Half Marathon.

And actually crossed the finish line!

The night before a friend and fellow personal trainer texted me and said "just remember don't get caught up in all the excitement and start out too fast. Go at your own pace."

That I totally ignored and took off like a bat out of hell.

It was really exciting to be running the streets of Memphis with people lined up all along the way to cheer us on.

I was feeling really good and had my best split at mile 5 which is the dreaded Beale Street hill. But I powered up that hill like it was nothing and at the very top got a text from Kid 2 who had been tracking me on the St Jude Race Tracking app. 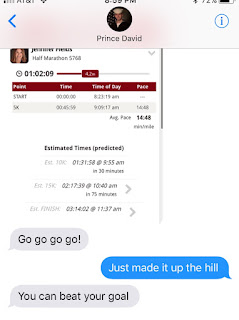 Heck yeah! I am moving baby. I got this! But it's also about that point I realized I had got caught up in the excitement and I needed to slow down. My broken foot from last year was starting to remind me that it never really healed properly and it was starting to get warmer outside.

Remember, I hadn't trained for a month since getting sick and dealing with the kids injuries. My last training day had been on an unusually cold day and when I left my house at 6am the day of the race I was dressed for a chilly day.

But at this point I still felt good.


And then, about mile 8 reality set in. Holy hell I still have five more miles to go. And my own race GPS was telling me I was a half mile ahead of every race marker I saw so I was getting really discouraged and a bit pissed off.

Why did I even decide to do this anyway. I'm not a runner. I hate running. This sucks.

About mile nine another text from Kid 2 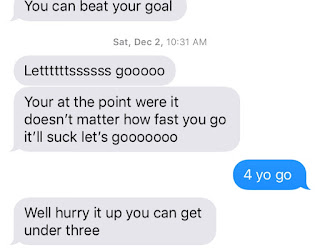 I did not make it under three hours because those last four miles just sucked. Like sucked big time. The route took us through the less interesting parts of Memphis where there weren't as many people lined up cheering you on.

Honestly what happened was I got in my head here.  We were on the same stretch of road for two miles so it felt like I was getting nowhere, I was tired, I was hot and I was ready to be done.

Finally I could see the mile marker 13 up ahead and I could see AutoZone Park, so I knew the finish line was getting close. I was trying to will my feet to go faster when all of a sudden my phone went crazy with notifications.

It was messages from eight of my lifeguards and two of my kids telling me how proud they were and congratulations and I was almost there. What are the odds that all those messages came through at that exact moment when I needed the encouragement the most?

I powered through and I crossed that finish line like a boss!

And I even have the medal to prove it. 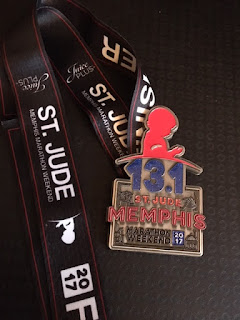 Posted by Jennifer Williams-Fields at 9:35 PM

Email ThisBlogThis!Share to TwitterShare to FacebookShare to Pinterest
Labels: half marathon, St Jude Half Marathon, training for a half marathon