I took advantage of a unique opportunity tonight and drove into Memphis to attend a Lululemon-sponsored yoga class on the rooftop of the Peabody Hotel.

I didn't tell anyone I was going. I didn't think I actually would. I'm not doing well in big crowds lately. Truth be told I'm not doing well anywhere lately. In fact as I lay around the house this afternoon it was kid #2 who said "oh just go you know this is something you'll think is cool." And as I walked out the door he hollered "and don't turn the car around and come back!"

Damn, my 15-year-old is being forced to become wise beyond his years.

As I pulled into the city parking garage I received a phone call. It was a call I'm always hoping and waiting for, yet when I hung up I felt nothing but the blanket of sadness envelope me again. But I'm already parked so I might as well walk over to the hotel to at least check it out.

The class began as the sun was setting. Almost 100 local yogi's with their mats placed in a circle moving and breathing with an amazing view of the city and the Mississippi River. The Memphis air, as always, is humid but there's a nice breeze blowing off the river. I actually hear birds chirping, something I've never noticed from the noisy streets below. Although the class was accompanied by cool blues music from a DJ, I could also hear live music wafting up from Beale Street below.

I should have been in heaven. I'm not. I'm in hell.

I now understand how cutters can cut themselves. It has nothing to do with the act of taking a razor blade to flesh and drawing blood to inflict external pain. Rather it's to release the internal pain that is so deep inside it has taken over your body and your soul. You become desperate for a way to get it out. Tears don't help. Exercise, vomiting, purging don't help. The pain is there and it is slowly killing you.  You don't know how to make it leave.

My yoga mat has always been a space of solace for me. Not lately. I've avoided it because any time I step foot on the mat, I fall apart. And I do that enough involuntarily now that I'm sure not going to sign up for it. I've done OK while teaching my classes, only a few have noticed when I need to take a moment and swallow back tears. But when it's just me alone with myself, I break down. But I'm here on the roof and I'm going to practice along with all these other smiling yogis.

I'm doing OK at first. I was moving, I was breathing, I was doing as I was told. But as my hips became looser, my second chakra begins to open. The second chakra, known as Svadhisthana, is located in the hips, lower back, reproductive organs of the body. It is associated with water and the place where, especially women, store their emotions. I'm flowing through the practice yet now I'm crying.

I try to control the sobbing and pretend I'm wiping sweat as I try to wipe away the tears. But I can't stop. The pain is too much. I finally drop to child's pose and for a minute I wonder what others think as they see my back heave with each sob. I can't think about it for long because once again I feel like I'm going to suffocate. My chest is hurting. The physical pain is too much, I've got to get out of here.

As we lay back in savasana the tears are freely flowing down my face and I really can't breathe now. I'm trying to slow down and deepen my breath but I can't. The night sky feels like it's laying heavy on my chest.  I have to get off this roof now. I'll jump off if I have to.

Just as I moved to get up, the woman next to me reached over and held my hand. This was a woman I only see once per year at yoga events, who knows nothing of what my pain is, yet she held my hand and she held tight. She wouldn't let go as I tried to pull and run away. Eventually as I lay atop the city, I gazed at the moon and slowed my breathing and stopped my tears. The sky became more open, lighter, not as suffocating. For a brief moment I was able to let go and relax.

I see now I needed to be at that class tonight. If for no other reason it got me to the place I was ready to sit and write again. These words were going through my head as I downdogged and back bended.

It is a small piece of the pain ready to escape. 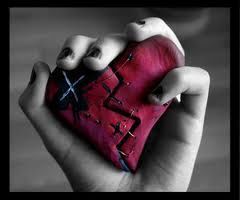 Posted by Jennifer Williams-Fields at 10:58 PM