One of the things  I didn't anticipate after getting divorced was my new-found handyman handywoman skills.

At first I was paralyzed when it came time for fix-it repairs around the house. I wouldn't even attempt to fix something I would just pick up the phone and call a friend. Thankfully, I have many good friends who rushed over to help.

Then I became angry at having to call friends to help me. I was married for 23 years and the person who used to do the repairs left and I am so mad at him well I will just show him and I will fix this myself! I became quite good at fixing just about anything with a screwdriver and duct tape. One night while sitting on the kitchen floor I even took a picture of myself fixing the refrigerator door. I posted it with the caption "F*** you refrigerator!"

Eventually, and thankfully, the anger began to leave and instead some confidence slowly crept in. The kitchen faucet can no longer be fixed with duct tape? Hmmm, how hard could a new one be to put in? The salesperson at Lowes assured me all faucets were universal and it was no big deal to install a new one.

But instead of sitting on the floor crying and saying "F*** you sink!", I googled 'how to replace a faucet'. I did end up having to call a friend that night.  But it turns out I wasn't installing it wrong. I just have an old house with weird plumbing and we had to be a little creative in how we ran the hoses.

When I had no hot water for a week, an old friend came over to fix it. I told him "No I want to do it myself you just tell me how." So for a couple hours on a Friday night we sat there with him giving directions and me actually doing the work. I am grateful for his patience. I counted only three times that he said "Are you sure you turned the power off" and only twice did he say "Just let me do it."

Tonight I asked Kid 2 where the saw was so I could fix Kid 5's bed. He just looked at me and said "Umm, in the garage. Why? Wait I'll help you."

Well I didn't want to wait. So I grabbed some boards and started cutting. Kid 2 heard the noise and came out and did end up finishing the job. But I had most of it done already!

I think my friends are also more confident in my fix-it abilities. A couple weeks ago I needed to replace the ceiling fan in the girls bedroom. So I pulled up a YouTube video that showed this woman taking out an old ceiling fan and putting in a new one all by herself. She said it's very simple to do and doesn't require any assistance.

There is no way I could hold the new ceiling fan up with one hand and run the wires with the other hand. So I did require some assistance but only because I only have two hands.

When my work was finished I took a picture and sent it to the friend who helped me with the hot water heater last year. 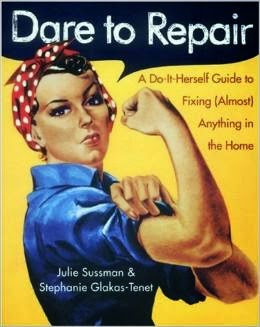 When I was searching for an image for this post I found this book for sale on Amazon. I've already ordered it and look forward to my next fix-it project!
Posted by Jennifer Williams-Fields at 10:15 PM