It's Not Geeky, It's a Book Club Kula

It's back - the return of Twitter Yoga Book Club!

This is not the stereotypical, stuffy, meet in the living room kind of book club. No, we are a cool kula of yogi's and book nerds who take advantage of social media and tweet our discussion using #YOBC. By using Twitter, I get to share the books with people from literally all over the world. And, sometimes the author even joins our Twitter discussion which takes it to an all new level.

The group had taken an unofficial summer break, but with some prompting from me and the need for a new good read from Meredith LeBlanc, we will begin reading again August 20 with the release of the much awaited Yoga Bitch by Suzanne Morrison.

And.. I tweeted Ms. Morrison and she said she will definitely be a part of our discussion group!

So, if you are looking for a good book to read, or a cool group of yogi book geeks, check us out on Twitter. There's no timeline for reading and you can tweet your thoughts at any time. 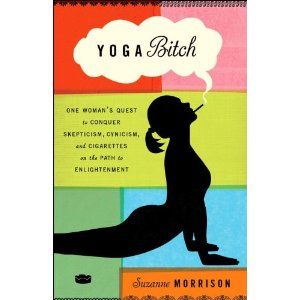 Update: The book is officially released August 16. But you can pre-order now on Amazon and it will delivered either to your door or your Kindle on that day. But even if you don't get it right away, just join in the discussion when you can!
Posted by Jennifer Williams-Fields at 11:17 PM