"Today, and everyday, I walk in the wake of millionaires who have gone before me creating a clear path for me to follow."
--- Wanda Marie
21 Day Wealthy Consciousness Affirmation
www.queenacademy.com

As I read today's affirmation, I didn't immediately think of millionaires in the sense of financially wealthy women.  Rather, I thought of women who have been been cast aside only to later rise up and become women of power and strength.

Women who were left, left to raise children alone, pushed aside or in any number of other ways told they weren't good enough anymore. Women who held their head high, who refused to accept their second place status and forged a new life for themselves.

I choose my female friends based on their moral character. They may not necessarily make the same decisions as me, but they operate on a higher level of consciousness. They value the bond between women, between mothers and between families.

Tonight I had the pleasure of spending time with two such women. Neither are financially wealthy, but they've both been where I am now and they have cleared a path for me to follow to build my own fruitful life. They are both examples to me that building a new life for myself is possible and I am capable.

Tonight was about celebrating our bond as women. Acknowledging the stages of our life, both the light and the dark times. There was no gossip or negativity, just love and creativity.

Although the pictures were similar, we each created with our own vision of ourselves and our life; where we were, where we are and where we want to be.  It was a very rich night of my life indeed. 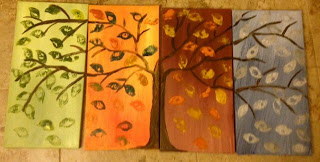 Posted by Jennifer Williams-Fields at 12:15 AM